On the Path: An Interview with Philip Boayke 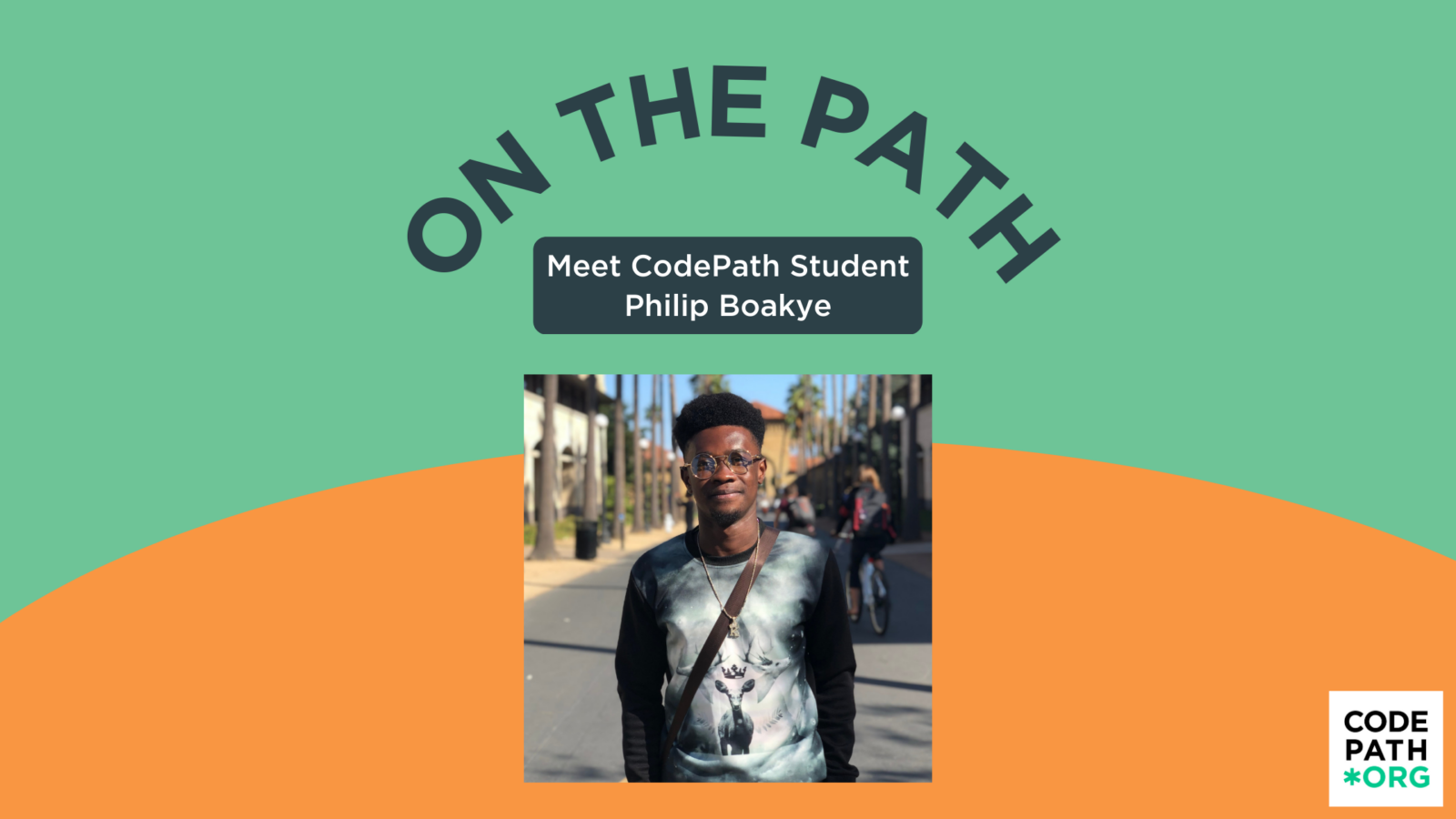 On the Path is an interview series with CodePath’s student community, highlighting our students’ stories, accomplishments, and journeys to become software engineers. Here’s Philip Boakye’s story.

Philip Boakye has always been a bit impatient. Growing up in Ghana, he would ask his father what the future held, and how he would know what he’d do with his life.

A year in the U.S. as a high school exchange student revealed the ways in which his education didn’t quite measure up to what he’d need to succeed in a global marketplace. Then, one day before graduation, Philip arrived home and found his younger brother shaking uncontrollably, unable to speak.

He asked his father: “What happened?”

“Apparently he was robbed at gunpoint,” his father said. “He was almost killed.”

His family was devastated by the attack, yet his brother hadn’t reported the crime to the police. And his father, who is an attorney, had no plans to report it either.

Years later, Philip can still recall the shock and alarm he felt, learning that because the police had no way of recording the crime in a reliable database, reporting it was of little use.

“If something like that happened to a kid here, the police and people would have followed up,” he said. “It kind of raised this kind of anger in me. A change was needed.”

He decided to learn software engineering.

Philip graduated from high school in Ghana in 2018, then took a gap year and in the fall of 2019 enrolled in the Minerva Project, an innovative undergraduate liberal arts program based in San Francisco that takes students to seven cities to study over the course of four years. As December 2020 began, he was preparing, with his classmates, to fly to Seoul for Minerva’s upcoming spring term. Among other cities, students study during their four years in London, Buenos Aires, and Taipei.

Yet for all of its innovation, Minerva doesn’t teach computer science, so in the summer after his freshman year, Philip enrolled in a CodePath course.

“CS is hard — definitely it’s not easy,” he said. “The first year I almost gave up. I just realized one thing: All these companies, there’s one thing they’re doing. It’s all about problem solving. Everybody wants to solve a problem.”

With CodePath’s help “and a good amount of work,” Philip secured two internships for the summer and winter terms, one at Microsoft, where he’ll be working on coding for the company’s popular Xbox gaming console, and another for the online instruction startup MasterClass, where he’ll be helping them redesign their website.

Looking back on his introduction to the topic, Philip recalled that he mostly learned on the fly.

“For other people, CodePath was like a boost,” he said. “For me, it’s like learning a whole other course on its own.”

“Behind the scenes, right after class or before class, I had to literally learn them on my own,” he said. “I was self-learning them because I had to stay on track with them. If not, I would fail on the assignments and not pass. So it forced me, it pushed me and motivated me to sit down and learn them on my own.”

After completing a basic course, he began working through CodePath’s mobile development classes. “I really like the software engineering program,” he said. “I’m planning to also join a software engineering program again next summer, because the one I was in was an intermediate track. They have an advanced track. I’m hoping to join the advanced track to really take advantage of every course CodePath has.”

Over the summer, and even as the Covid-19 pandemic spread, Philip worked for McKinsey, which introduced him to yet another way to bring his talents to bear on problems. “I really like consulting,” he said. “It’s a very beautiful thing to do, actually solve cases and help clients.”

Now 21, Philip envisions learning enough about software development and data systems to someday return to Ghana and help law enforcement, among others, improve their policies and procedures around crime reporting. “I always have to give back to my country – whatever I learned here, to at least develop and give back to my country.”

He added, “Every day a new program is being learned — new tools, new technologies, new languages. You always have to stay up to date. If not, you’re going to be far behind and you can’t just relax. You can’t sit on what you know because you’re going to be so outdated if you do that in the CS side of things. You have to always be learning.”

You can learn more about Philip and his professional life here.

On The Path: Q&A with CodePath SITE Alum Carlos Chavez

On The Path is an interview series with CodePath’s student community, highlighting our students’ stories, accomplishments, and journeys to become software ...

Meet Our Instructors: Getting Intensely Technical with Deonna Hodges

How a self-confessed “internet nerd’ overcame imposter syndrome, earned two bachelor’s degrees, pivoted her career from backend to Android development, and is ...

Beat The Odds: Getting Sponsored in the US